It was happening again.

To my right stood Wanda, loudly voicing her displeasure, her nape length ponytail wagging with every word. To my left was Charlotte. Her jelly bean-colored barrettes were clamped over her braids and were as frozen as the frown on her face.
And in the middle was me, trying to figure out how not to take sides…again.
At 9 years old, I was getting my first taste of a relationship where one rules over all, a dysfunctional friendship.
The three of us enjoyed being together. Playing jump rope on the playground. Eating Ellio’s frozen pizza in the school cafeteria. Talking excitedly about the newest toys in the Toys “R” Us Sunday circular.
But eventually, there were times when one of us would do something that would completely disrupt the peace.
Wanda’s peace.
Maybe we didn’t see Michael Jackson’s latest video. Maybe we had spearmint lip balm while she had cherry. Maybe it was because we didn’t wait for her after lunch. Maybe we liked Pepsi instead of Dr. Pepper.
Whatever the reason, Wanda would complain and usually Charlotte would counter back, resulting in a rip in our friendship blanket.
I would try not to take sides…but I would always end up taking hers.
During recess, I’d walk along the length of the playground with Wanda, half-listening as she complained about Charlotte’s latest act of insubordination. I’d scan the concrete for Charlotte and would finally spot her, playing happily, oblivious to the invisible friction that was rubbing me raw.
But then, as Charlotte probably figured, Wanda got over it. The rip was mended and all was well again.
Until next time.
We were 9-year-old girls who eventually grew into 20-something women and outgrew such things.
But thinking back made me wonder:
What type of friendship can survive when one friend is being held hostage?
Where one friend can’t be free?
A muzzle when you speak?
Pushing your actions through a sieve?
Filtering your desires and your fears?
How can something so essential as being bare, being yourself before a friend launch an assault of insults?
A refusal of attention?
The disintegration of a friendship?
Or was it a friendship to begin with? 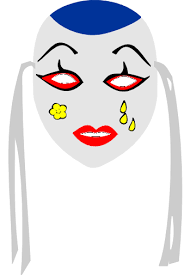 Recently, I met up with a good friend who I hadn’t seen in a while. Over plates of crispy fried chicken and serenaded by a classic R & B mixtape, Beth filled me in on the parts of her life I missed: Weddings, births, school, the whole ball of wax.


While I scrolled through her digital camera of captured moments, I paused at a picture of her nephew with his mother. She beamed as I marveled at how fast he grew. But when I asked about his mother’s relationship with Beth’s brother, she sighed.


“I think they moved too fast. By the time the baby came, he was trying to figure out if he even liked her at all. “


Sometimes, you can get so caught up with a pretty face and a seductive smile, thinking that such a person is going to be a tremendous addition to your heart.


But though they look good…


though they smell good…


when all that is gone, will I still like them?


Is there more to our relationship than what feels good to my senses?


Get clear eyes. Lust can be a consummate mask.

Like Loading...
0 CommentsLeave a comment
© jh and the beautiful project, 2009-2016. Unauthorized use and/or duplication of this material without express and written permission from this blog’s author is strictly prohibited. Excerpts and links may be used, provided that full and clear credit is given to jh and the beautiful project with appropriate and specific direction to the original content. For permission to use, please contact beautyisaproject@gmail.com.

90's bred BFF h.o.p.e. Heart Matters It's All Relative More Like Him Princess Reason to... Red Herring Royalty The Office The Project